I am currently preparing for an exhibition in early 2020 at The Courtyard, Hereford’s Arts Centre.  It is titled ‘Another Country’ and runs from January 10 to February 15.

The nucleus of the show will be the paintings and drawings which I made following the residency in Romania in April 2019 and new works based on the countryside around the Malvern Hills.  Then the subject matter widens to include works exploring rural themes from the last decade.  The actual gallery at The Courtyard is quite small but I have been given access to a huge amount of wall space in the arts centre which will enable me to show large scale charcoal drawings and related paintings.

Further information and an online ‘taster’ catalogue which gives a flavour of the exhibition is available here:

In the studio: a new drawing

Over the last few months I have been working on the Romanian project (see previous posts).  This drawing shows Olga and Costica, a couple who live near the manor house in the village of Valeni in Moldavia, NE Romania.  We were taken to visit them by the local Orthodox priest and although verbal communication was limited they were very warm, friendly and gracious.  They have about 2 hectares of land and have a fully equipped carpenter’s workshop, cowshed, barns and a poultry yard. They keep a cow and calf, two pigs, rabbits, hens and a fierce looking black dog on a chain.  Costica is a skilled carpenter and Olga is a wonderful baker, producing amazing pastries and cakes from an outdoor bread oven.

They must be the last of a generation with the skills to be virtually self sufficient.  We understood that their two sons have left the village.  In the drawing I try to convey something of their cheerful self reliance.

A Day of Drawing at Quay Arts 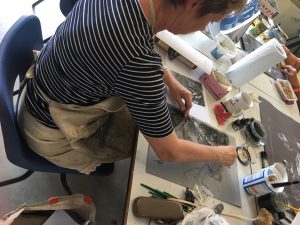 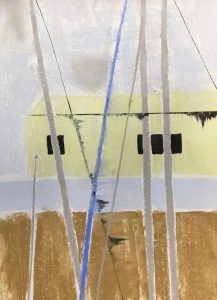 While I was on the Isle of Wight I taught a drawing class as part of the Quay Arts annual Summer School.  It took place in Jubilee Stores, along the quay at Newport Harbour overlooking the River Medina.  It was an enjoyable day with a group of committed students who produced some very good work.  We experimented with different media, working mainly from observation.  Here are some examples and a glimpse of the surroundings. 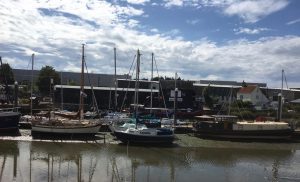 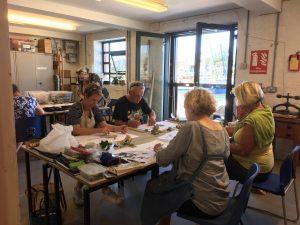 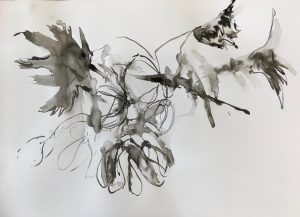 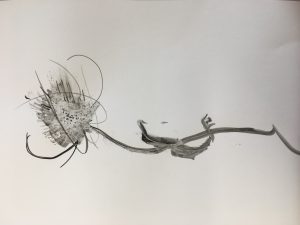 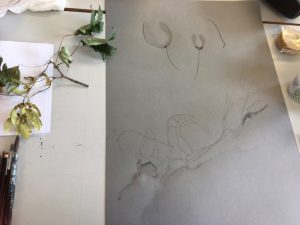 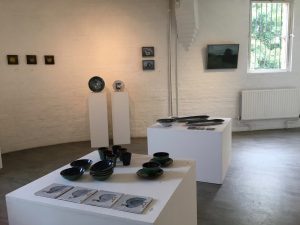 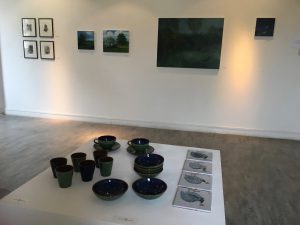 The exhibition in the Clayden Gallery at Quay Arts on the Isle of Wight ended on Saturday, 27 July.

Once again the combination of Molly’s pots and my paintings worked well.  We made no particular advance plans of what we would put together but themes, forms and colours emerged and complemented each other.  Molly’s new pots in dark greens and blues were seen against my new painting, Crows in the September Orchard, which is predominately green and blue.  My small paintings of apples, quinces and blossom set up a fruit and flower association with Molly’s cobalt wash dishes featuring quinces and lemons.  In 2017 there was a breezy maritime feel to the exhibition, this year it was more green and rural.  We still had our birds – the crows in the orchard and Molly’s guinea fowl tiles.

We look forward to continuing this occasional collaboration in the future.

A second exhibition with my sister, the potter Molly Attrill, opens in the Clayden Gallery at Quay Arts, Newport Harbour on Saturday 6 July and runs until 27 July.

We collaborated in April 2017 when we focussed on the small stretch of coastline on the Southern tip of the Isle of Wight where we grew up.  This time we have left ourselves free to explore our own preoccupations.  In Molly’s case, she is showing new pots in the traditions of earthenware slip and maiolica.  She has recently been included in an exhibition in Tokyo which traced the influence of Bernard Leach on contemporary potters.  My focus moves inland from my native Island to my present home in Malvern, Worcestershire.  Just over the Malvern Hills and across the border into Herefordshire we have 10 acres of land where we have planted an orchard of traditional local apples.  I am showing works describing this landscape.

Here is a new painting Crows in the September Orchard which will be shown for the first time in this exhibition. 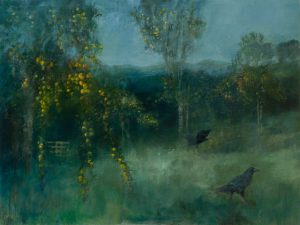 I am currently developing my work following the Romanian trip.  It was an interesting and challenging experience.  We drove there and back and it is a very long way.  Romania, once you get there, is a huge country and Valeni is in the remote North East beyond the Carpathian mountains.  Valeni itself is isolated, the nearest town with shops is a 50 minute drive over some unmade up roads.  In fact its isolation is quite difficult to imagine in advance for anyone coming from England.  The manor house has been beautifully restored to its former glory by Michael, Baron de Styrcea, whose ancestral home it is.  The studio is in an adjoining building, once the estate manager’s house.  There are remnants of the communist era with vast cowsheds and a water tower.  The village of Valeni consists of small attractively painted houses of one storey, each in a compound with fruit trees, poultry, a cow, a couple of pigs.  The Valeni priest took us to visit several of these houses and we were very touched by the friendliness, dignity and generosity of the villagers.  They are the last generation who have the skills to be self sufficient and it is sad but inevitable that their children have gone to live in cities in Romania or even other countries.

The landscape is vast and unfenced so that there are still flocks of sheep roaming freely with an attendant shepherd and several notoriously fierce sheepdogs.  Horses and carts are a common sight.   Around Valeni it was  rolling agricultural country, with some areas of forestry.  We went further North  to Bukavina near the Ukrainian border, to visit the medieval painted monasteries.  Here it is mountainous and forested with majestic passes through the mountains.  The monasteries are unique, painted on the outside walls as well as inside with Biblical scenes of Heaven and Hell, and tucked away in remote locations.  They are still in use as monasteries, sometimes run by monks and sometimes by nuns.  It was the Orthodox Holy Week while we were there and we were fascinated by the call to prayer, played on the wooden toaca.

Romania is scarred by the Ceaucescu era – the dictator planned to herd the peasants off their land and into concrete blocks of flats in the towns.  Communist concrete is everywhere, along with derelict factories and industrial plants.  Now there is more freedom to build many of the houses are ugly and half finished and there seems to be little planning control.  All the more credit to Michael de Styrcea for so lovingly renovating his family’s home with such taste and discernment.

While I was there I filled a sketchbook, made some drawings and took a lot of photographs.  I needed time to assimilate the experience and have returned to my studio to develop ideas and themes which have gradually suggested themselves.  So more of this as time goes on.

I have been invited by Michael Baron de Styrcea to undertake an Artist’s  Residency at Valeni, his family estate in NE Romania.  The estate was in his family for generations and he has now reclaimed it and renovated the manor house and other buildings.  The brief is to take inspiration from the ancient methods of farming and rural life which are still to be seen but are rapidly changing as Romania is modernised within the European Union.

We are setting off this week and driving over there via Austria and Hungary.  We plan to stay there for 3 weeks or so before returning in early May.  Quite an adventure and one I wouldn’t contemplate without Angus as my very experienced driver.

Following on from this I have arranged a solo exhibition at The Courtyard Arts Centre in Hereford in early 2020.  My intention is to include works from the Romanian residency and make connections with the many Eastern European workers who have been invaluable in harvesting the apples, strawberries and hops in Herefordshire. Who knows whether they will have all gone home by then?

In the meantime I’ll post more information about how I get on with this project.  I am intending to do a lot of drawing out there and then continue to work in the studio on my return.

This exhibition at Twenty Twenty Ludlow, which opened on 4 August and runs until 1 September, includes my large charcoal drawings, small ink drawings and a series of paintings all with the theme of trees in the landscape.  Painters Malcolm Ashman and Andrew Lansley, and the potter James Campbell are also exhibiting.

Here is an image of the three large charcoal drawings in the gallery: 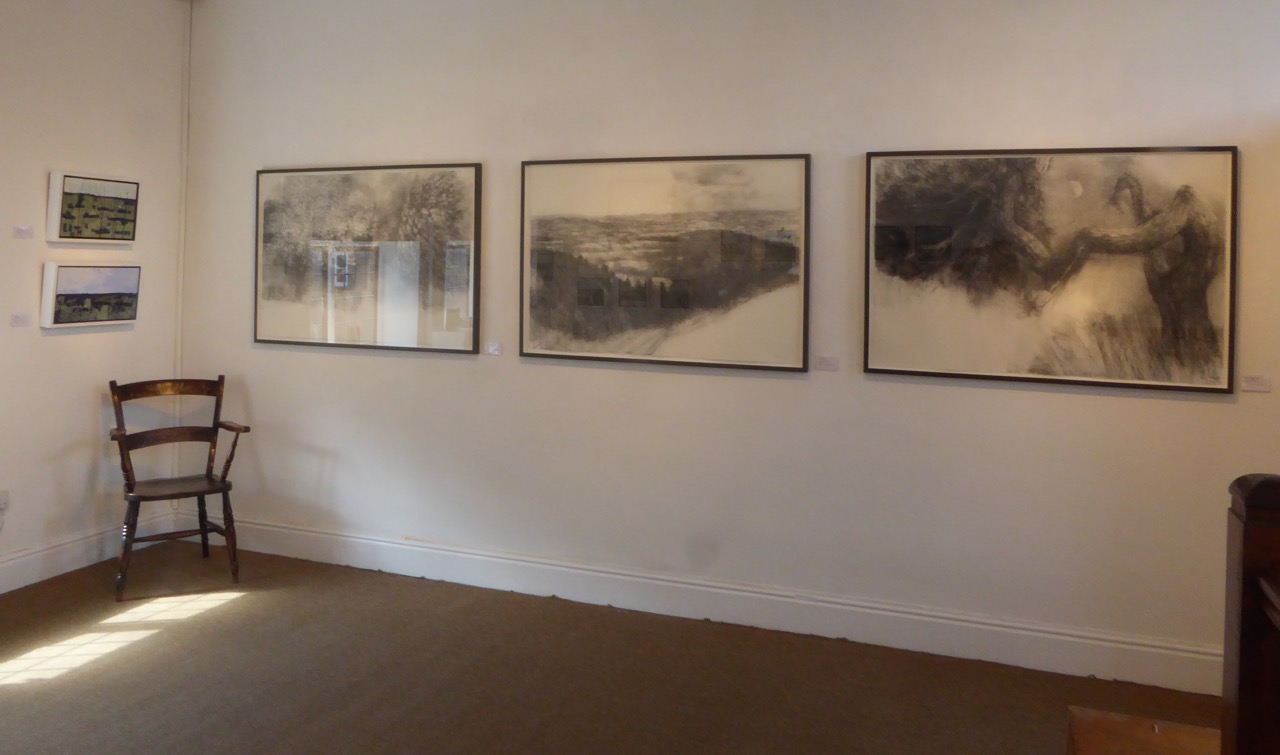 Summer 2018 exhibitions round up

This summer my work has been shown in a solo exhibition at the  Campden Gallery, Chipping Campden, in May (see previous post) and also in Sussex at the Moncrieff-Bray Gallery near Petworth, and in London at Art First’s second residency at the Eagle Gallery in Farringdon in their works on paper exhibition “Paper Matters II”.

On Friday, 3 August the final exhibition of this season opens at Twenty Twenty Gallery in Ludlow.  The exhibition ‘The Contemporary Landscape Revealed” (4 August to 1 September) features my paintings and drawings alongside works by Malcolm Ashman and Andrew Lansley, and the potter James Campbell.  I shall be interested to meet the other two painters.  I happen to own a James Campbell landscape drawing as well as one of his pots so it is pleasing to be in an exhibition with him.  An illustrated catalogue is available and there are full details on www.twenty-twenty.co.uk

I hope to post images of the exhibition shortly.

May at the Campden Gallery

My exhibition Bright Clouds of May opened on 5 May on a glorious cloudless day.  It is a lovely gallery in a beautiful old building in the centre of Chipping Campden – itself a beautiful Cotswold town with an interesting history relating to the Arts & Crafts Movement.

Here are some images:

A gallery shot:  the life-size bronze boar is a resident of the gallery. 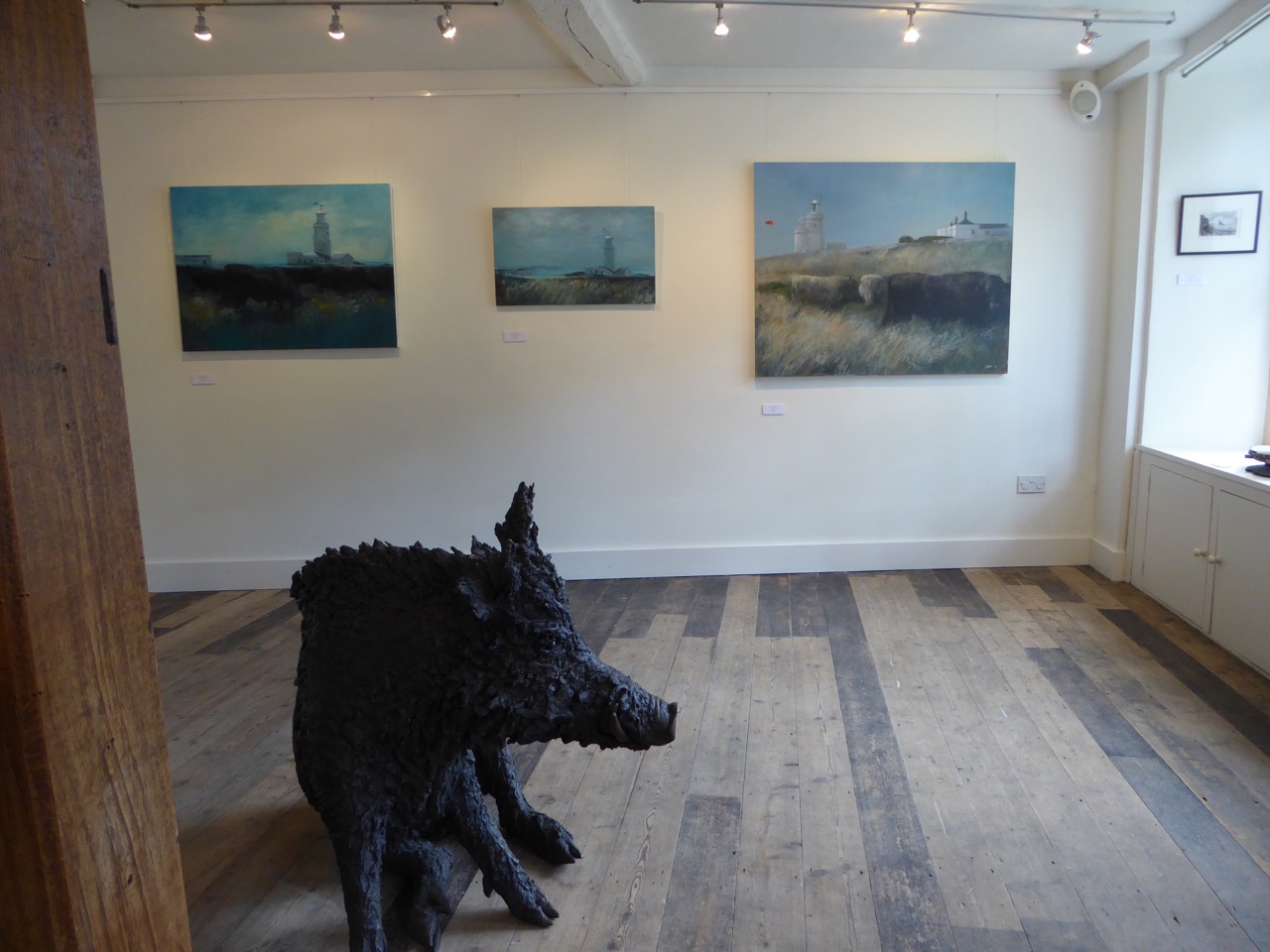 And finally a little painting of crab apple blossom, hung at the last minute before the show opened and still not quite dry.  I wanted to capture the ephemeral nature of the subject as quickly and economically as possible:

Full details and online catalogue are on the Campden Gallery website:  www.campdengallery.co.uk

The exhibitions runs until 28 May.

This summer is a busy one – as well as the solo exhibition Bright Clouds of May at the Campden Gallery, I have a drawing and 4 small paintings in Sculpture and Paintings for Summer 2018 at the Moncrieff-Bray Gallery in Petworth, West Sussex from 19 May to 17 June.  I will also be showing 3 drawings in Art First’s summer exhibition  Paper Matters 2018 at the Eagle Gallery, Clerkenwell, London from 7 to 30 June.

More information on both of these will be posted soon.  Paper Matters 2018 will include Midsummer Mare 2, the drawing which featured in my post of August 3, 2017 – the first time it will have been exhibited.

I shall also be in a 4 person exhibition at TwentyTwenty Ludlow in August but will give more details about this nearer the time.