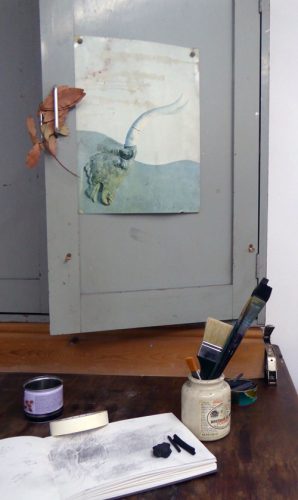 Bridget Macdonald was born on the Isle of Wight and trained in Fine Art from 1983 to 1987 at Stourbridge College and the School of Art and Design, Wolverhampton Polytechnic. Since then she has built up a career which has been marked by solo exhibitions in public galleries such as Wolverhampton Art Gallery, Worcester City Art Gallery, Derby Art Gallery, The Rotunda Gallery at Birmingham University, and QuayArts on the Isle of Wight. She has also shown regularly with her London gallery Art First since its inception and has participated in many projects and group exhibitions which the gallery has initiated.

In 1990/1 her series of drawings based on the beekeeping poems of Sylvia Plath were included in ‘Mothers’, an important survey exhibition at Ikon Gallery in Birmingham. Large scale charcoal drawings, often based on art historical or literary sources, were acquired by Wolverhampton, Worcester and Birmingham Art Galleries and entered several corporate collections.

From her 2006 exhibition ‘Inland’ at Worcester City Art Gallery, her painting Winter Cattle was also acquired for their permanent collection.

In 2011 three of Macdonald’s key landscape paintings of the Malvern Hills and the Isle of Wight were acquired for the House of Lords’ new building at 1 Millbank.

In 2013 she had a major solo exhibition’The Poetry of Earth’ in the Michael West Gallery at Quay Arts, Newport, Isle of Wight. In 2016 she had an exhibition at Worcester City Art Gallery, ‘This Green Earth: Bridget Macdonald and the Landscape Tradition of Claude Lorrain, Samuel Palmer and Peter Paul Rubens’, where her paintings and drawings were hung alongside works by these three masters on loan from the Ashmolean Museum and Manchester City Art Gallery.

In 2020 a solo exhibition was held at the Courtyard Arts Centre, Hereford: ‘Another Country’ which included new works from an artist’s residency in Romania in 2018 as well as an extensive selection of other new works and drawings and paintings from the past decade. In 2020 a smaller exhibition ‘Field and Orchard’ was hung in The Great Barn at Hellens Manor, Much Marcle, Herefordshire.