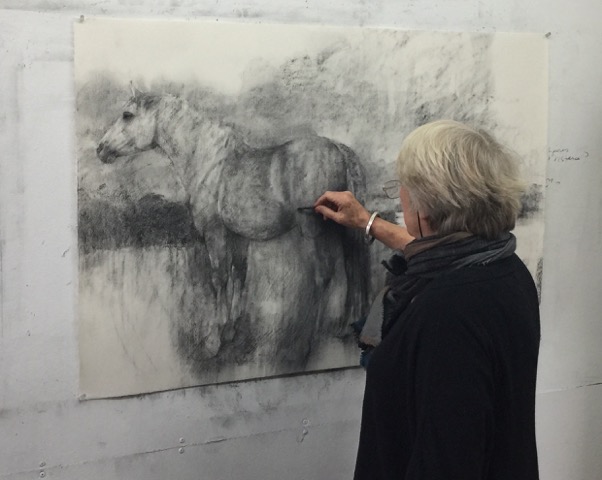 Bridget Macdonald comes from a farming background and has used the classical literary concept of the pastoral as a framework on which to build her own individual way of working.   She incorporates an interest in the figure, the figure in the landscape and the landscape itself into a coherent but varied body of work which explores connected and complementary themes.

Her childhood landscape on the Isle of Wight has prompted an ongoing series of drawings and paintings featuring the area around St Catherine’s Lighthouse. Her present life in Malvern has produced paintings of the River Severn in flood near Worcester, and the orchards and countryside of Herefordshire.   Animals occur frequently, whether semi mythical beasts such as the Red Poll bull once owned by her grandfather, a beautiful mare in the country below the Malvern Hills, bulls and horses in the Camargue, or a hare glimpsed in an orchard in Prague on a winter afternoon.

Her work relates closely to art historical sources and her acknowledged influences include Venetian painters of the Italian Renaissance, Poussin, Claude Lorrain, Samuel Palmer, George Stubbs and others. She has also been inspired by poetry, particularly the work of Ezra Pound, Basil Bunting, Sylvia Plath, Ted Hughes and Seamus Heaney.

"A synthesis of observed reality, memory and artistic or poetic source material is the basis of Bridget’s practice, underlain with flashes of nostalgia, dispossession and loss."
Dr Paul Spencer-Longhurst in his catalogue essay for the exhibition This Green Earth: Bridget Macdonald and the Landscape Tradition of Claude Lorrain, Samuel Palmer and Peter Paul Rubens at Worcester City Art Gallery in 2016.

"It is the tension between things observed and things remembered, between the immediacy of a specific visual stimulus and a process of retrospective distillation, that gives her work its power."
Sheila McGregor in her catalogue essay for Inland, an earlier exhibition at Worcester City Art Gallery in 2006.